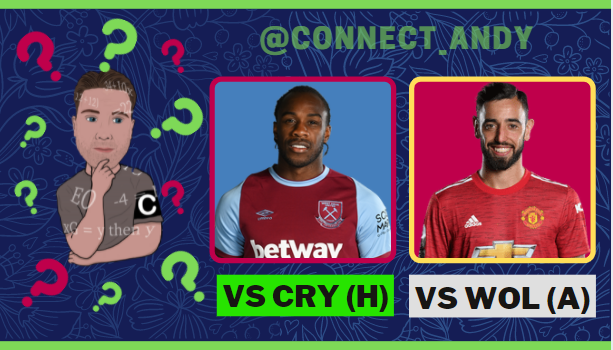 We explore the best options for the Fantasy Premier League captain for Gameweek 3 and reveal the results of our captain poll – who will you choose this FPL Gameweek?

The captaincy debate for GW2 centred around the same two players once again – Mo Salah & Bruno Fernandes. Both options hauled heavily in GW1 and, with decent fixtures again in GW2, looked set to score even more points.

As it turned out, those who captained Salah walked away with the (marginal) bragging rights, following three points against Burnley at Anfield. Bruno, who also blanked, picked up a single point thanks to a yellow card and goal conceded. When Salah had the ball in the back of the Burnley net during the early kick off on Saturday it seemed like the right captaincy call, but the offside flag spoiled the party.

Elsewhere, West Ham ran riot against a depleted Leicester side with Antonio & Benrahma at the centre once again. Arguably assisted by Leicester dropping to 10 men in the first half, Antonio in particular looked in sizzling form scoring twice and setting up a goal for Benrahma. This performance has lead to Antonio becoming a front runner in the captaincy debate for gameweek 3.

Results of the Poll

The results of the Twitter poll this week make for interesting reading. Before Monday night, Antonio would only have been considered by the more ‘maverick’ FPL managers, but now looks to be a mainstream captaincy option; according to Twitter anyway!

Once the dust has settled and the deadline looms, perhaps the Bruno captaincy train will begin to gather speed once again. As Team Connect’s FPL Raptor (Ross) eloquently explores in his book ‘The Mind Game: Gaining a Psychological Edge in Fantasy Premier League’, we become more easily influenced by the information we receive most recently (recency bias). Had West Ham vs Leicester been played at 3pm on Saturday, with 4/5 fixtures still to be played, perhaps the Antonio captaincy movement wouldn’t be as strong.

Anyway, we’re not here to talk about psychology (sorry Ross!); it does make for an interesting debate though! Lets look at the key stats and captaincy options ahead of gameweek 3.

Who are the main contenders?

Admittedly we’re only two gameweeks into the season and data is still very raw, but it certainly paints an interesting picture so far. Unsurprisingly, Antonio (7.7m) has posted the best underlying stats so far; justifying his 0.2m price rise since the season started. According to Fantasy Football Fix’s Price Change Predictor, it looks like he will rise again before the GW3 deadline.

Despite Salah’s (12.6m) encouraging start to the season, he is not one of the main contenders for captaincy this week. Liverpool face Chelsea in what should be a relatively tight game and therefore will reduce the likelihood of the Egyptian midfielder ‘going big’ against a strong defence. That said, Chelsea will certainly play more on the front foot than Burnley did, which may present more counter-attacking opportunities for Liverpool.

Had Kevin De Bruyne (12.0m) been fit, he certainly would have been in the captaincy debate against an Arsenal side who are really struggling. Unfortunately there isn’t enough trust in Pep’s selection to target that fixture, as rotation is already starting to cast doubts. Mahrez, who seemed primed to get regular minutes in the opening games, has only played 94 minutes.

Bruno will be looking to replicate a scintillating GW1 performance having been left frustrated against Southampton in GW2. No returns, plus a yellow card, is not likely to be repeated too often this season. That said, the early performance indicators don’t currently have the Portuguese midfielder among the top performers so far; just 3 penalty box touches per 90 is bettered by 50 other players which suggests he isn’t getting involved inside the opposition area too often.

Man Utd travel to Wolves in GW3. Wolves can count themselves a little unlucky in their opening games – losing 1-0 on both occasions – but their underlying stats have been impressive. Defensively, only Chelsea and Man City have conceded more shot attempts than Wolves (17); suggesting they make it difficult for their opposition to create chances.

Both teams are at the top end of the ‘shots taken’ metric, which may make it tougher for either team to register a clean sheet this week. Adding another data point can drastically alter our assumptions at this stage of the season, so certainly don’t over-analyse the meaning of the stats so far. Bruno is a strong captaincy contender this week even if the data doesn’t appear to support it just yet.

What a start to the season Antonio is having.

Antonio was a frustrating player to own last season; quality performances and hamstring injuries seemed to follow each other to a point where it was a matter of ‘when’ rather than ‘if’ he picked up another knock. So far, so good for the West Ham forward who looks fit, strong and in form. Of course, he could pull up in the next game and be out for a few weeks, but that is something us FPL managers can deal with if the issue presents itself.

Not only does Antonio have the most FPL points from the opening games, he also dominates the underlying stats. He currently sits in 1st place for goals (3), xG (2.46), shots (11) and big chances (5). When a player posts those kind of numbers, you have to seriously consider a way of getting them into your team. Furthermore, should they be given the armband?

West Ham host Crystal Palace in GW3, and will be full of confidence having put four goals past Newcastle and then Leicester. Palace were convincingly (and unsurprisingly) beaten in GW1 by Champions League winners Chelsea, but held firm in a goalless draw against Brentford in GW2. It remains to be seen how their defence evolves under Patrick Viera, but West Ham will fancy their chances.

If there was ever a time to back a non-premium player with the armband, this could be it. Antonio has the form and fixture, while question marks surround a few of the other options.

It appeared for a while that the pressure of leading the Spurs attack would be loaded onto Son’s shoulders amid talk of Kane moving to City this summer. That move appears to have fallen through for Kane, meaning he will likely join Son in the starting line up this weekend. Son himself was withdrawn early (70 mins in) from the game against Wolves, with manager Nuno citing a “strange feeling” in the warm up.

Son scored the match-winning goal in an impressive GW1 victory over Man City, but there hasn’t been much supporting data that suggests he will provide goal returns in the weeks ahead. With zero big chances, big chances created and assists, there is still plenty of room for improvement. Perhaps the return of Kane will enhance those figures.

It’s a good fixture for Spurs in GW3; they host newly-promoted Watford who have conceded four goals in their opening two games. Particularly if Kane returns, you would expect Spurs to create much more than they have done in their games so far against weaker opposition at home. We don’t have much data for Kane at this stage, hence the focus on Son, but either of these two premium Spurs options should make strong captaincy candidates this week.

The first two gameweeks felt like a straight shootout between Salah and Fernandes; ultimately there was very little between them in the end. This week, however, looks to be much more open. We’re now starting to get a real flavour of which players look to be ‘in form’ while more premium options are starting to become desirable. We haven’t even mentioned players like Kane, De Bruyne or Lukaku; their time will come!

While my default process is to select one of my premiums for captaincy, I’m willing to add Antonio into the mix for GW3. Considering I selected my squad with Fernandes as the captaincy option for GWs 3 & 4, having another option is quite refreshing. If Kane, for example, had started the season like Antonio, he would be made captain by the masses this week without question.

So, has Antonio done enough to prize the armband off Fernandes this week? I’m not 100% sure he will outscore the United midfielder, but I’m happy enough that my reasons for captaining Antonio carry enough weight for me to avoid regret should it not work out. There are times when you need to back your gut, particularly this early when data isn’t very trustworthy.

I’m very excited to see who GW3 pans out; the FPL transfer market it extremely volatile at the moment which adds another element of pressure to decision making. No doubt there will be a new bandwagon over the international break!

Be sure to keep your eyes on the FPL Connect twitter page for all our latest releases, this season promises to be our biggest yet.