In the latest of our weekly series, we’ll be bringing you the important news from every Premier League press conference that impacts your Fantasy Premier League team selection for FPL Gameweek 3

As usual, feel free to give myself (FPL Connect) a tweet if you find there are any problems with this article.

All the best for Gameweek 3 of the new season everyone – let’s do this!

Manuel Pellegrini has revealed that he has an almost fully fit squad to choose from this weekend with Winston Reid being the only player missing out. Sebastian Haller and Felipe Anderson could return to action for the weekend’s clash against Watford, while Mark Noble and Jack Wilshere could also get minutes under their belt.

“This week we have just Winston Reid out – all the other players are fit. Jack, as with all the players coming back from long injuries, needs time to recover his performance.  We’ve giving him minutes, the same as happened with Carlos Sanchez, with Andriy Yarmolenko, and was happening also with Manuel Lanzini last season, so we hope that every game he plays he will improve”

Chris Wilder has revealed that Ravel Morrison could make his debut for the blades this weekend. Morrison featured in pre-season and Tuesday’s behind-closed-doors game with his former club Manchester United. Wilder also mentioned that John Fleck is a doubt for this weekend while Callum Robinson could return:

“We’ve a doubt about John Fleck but Callum has trained all week, We’ll give John that time to recover.”

Josip Drmic and long-term absentees Timm Klose and Christoph Zimmermann are not expected to be involved while  Ibrahim Amadou could be in contention to play for the first time since his loan move from Sevilla.

Granit Xhaka
Back in full training.

Mesut Ozil
Back in full training.

Emile Smith Rowe
Groin. Aiming to participate in full training by the end of August. 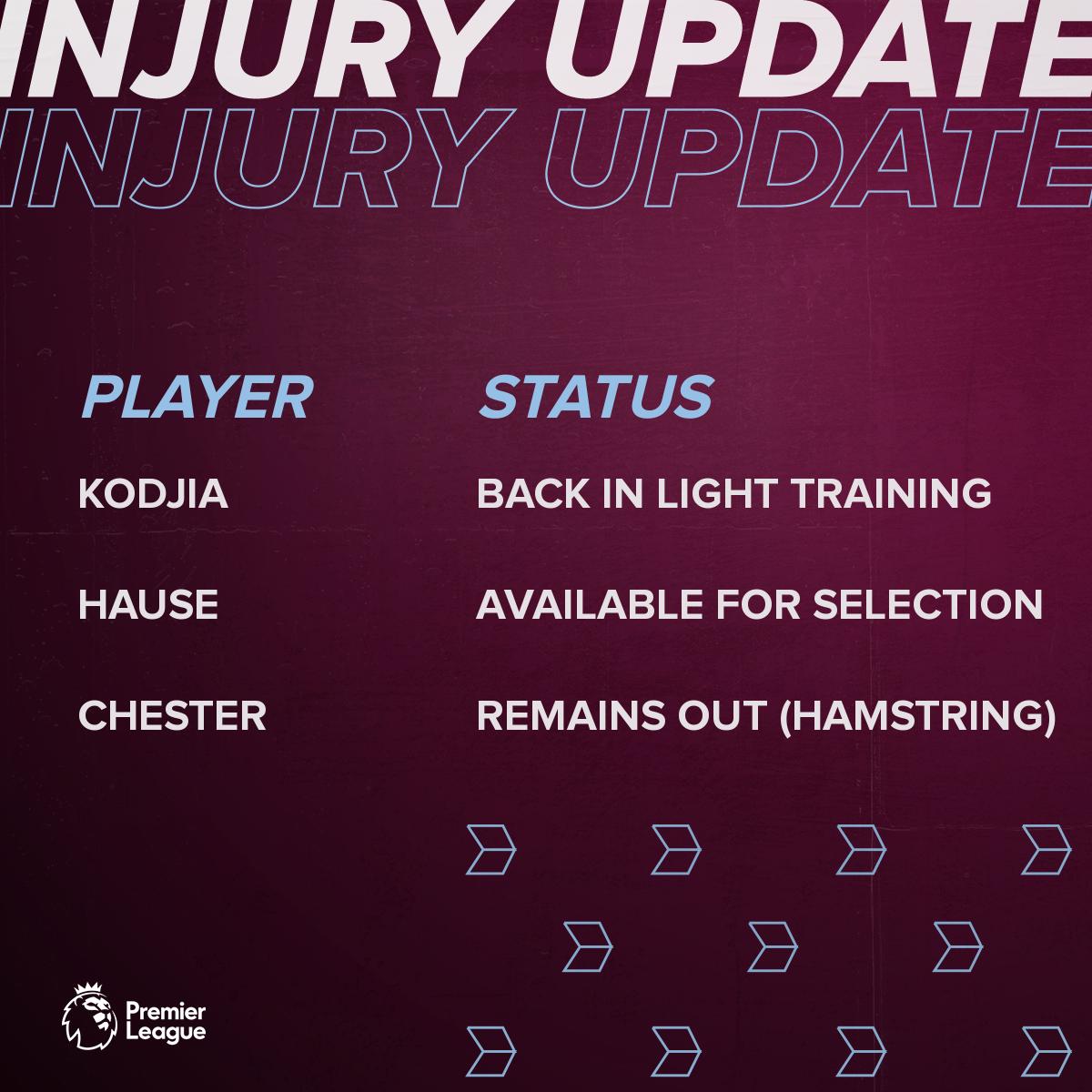 Roy Hogson has confirmed that Sakho and Tomkins are out for this weekend’s match against Manchester United.

“We don’t have any problems other than the ones we’ve been wrestling with, with Mamadou Sakho and James Tomkins. Apart from that, we’re okay”

Marco Silva has confirmed Lucas Digne will be fit to face Aston Villa on Friday night, with only Fabian Delph definitely set to miss out on the trip to his former club.

Silva also confirmed Leighton Baines is available for selection having missed Everton’s opening two fixtures of the campaign, while Morgan Schneiderlin is back in contention after serving a one-match suspension for his dismissal against Crystal Palace.

“But he (Alex Iwobi) started really late, just now is his second week working with the team, he didn’t do pre-season and, if you can, you have to take care with the situation and give him enough time to get fitter. But, of course, if you need him during the games he is able to help us, not for 90 minutes, but he’s getting better and, if I decide [to play him], he’ll be ready to help and to give the high quality that he has, I don’t have any doubts about that

Djibril is training with the first team. He’s trying to settle. He trained the whole pre-season with his former club so, when he arrived, his physical condition was really good and he’s ready to play if I decide in this way. Of course, now it’s just a matter for him to understand everything that is our idea and our philosophy as well but, if I decide [to play him], he is ready to play.”

Brendan Rodgers says Ben Chilwell is a doubt for Saturday’s trip to face Sheffield United and Christian Fuchs could once again fill in at left back.

“Ben has had an injection last week and he’ll be in training, we’ll see if he’s ready for the weekend, but it’s likely he’ll be ready for next week (vs. AFC Bournemouth).”

Ralph Hasenhüttl has a fully-fit squad to choose from, with Alex McCarthy recovering from the minor injury that forced him to miss the Liverpool clash last time out.

Hasenhüttl was pleased with the impact of attacking substitutes Danny Ings, Stuart Armstrong and Moussa Djenepo in that game, while new signing Kevin Danso is another option at the back.

Mauricio Pochettino will get a boost this weekend as he welcomes back Heung-Min Son from suspension.

Juan Foyth (ankle) and Ryan Sessegnon (hamstring) are still unavailable as they continue there rehab.

Tanguy Ndombele picked up a thigh injury during training and will be unavailable this weekend. Meanwhile, Alli is back training with the first team squad.

Troy Deeney had a minor knee operation earlier this week which is likely to sideline him for several weeks. Javi Garcia is looking at Danny Welbeck and Ismaïla Sarr to step up and fill the void.

“Both are training with the team. Both are not in the best condition but most important in this moment is that they can help us. I’m sure they cannot play all the minutes, but they can help us in the next performance.”

Welbeck is slightly further ahead of schedule than Sarr when it comes to acclimatising to Gracia’s comprehensive game-plan, but he hasn’t started a game of any sort since the beginning of November.

“Sarr is the player that needs more training but from the first session you can see his quality. He’s fast, good technically and a good winger, sharp and I’m sure he gives us a good option to change the games. It will depend on other players in the squad on how he can help us.”

Graham Potter confirms there are no fresh injury concerns for this weekends’ game at the Amex. Jose Izquierdo, Yves Bissouma and Ezequiel Schelotto are the three confirmed absentees for the visit of Southampton

Steve Bruce confirmed the Joelinton is back to full strength and will be available on Sunday against Tottenham. Allan Saint-Maximin has overcome a minor hamstring problem and is fit for Sunday as well.

Meanwhile, Christian Atsu has trained and is edging closer to a return.

On the absence of Longstaff from the XI last week:

“I detected he was a bit ginger with his knee, which was understandable. I had a conversation, it’s normal to miss a game or two to make sure he’s ready. When he came on, he had an immediate influence; we were much better.”

Arnaut Danjuma (foot) and Lloyd Kelly (ankle) closer to a return than any of the other players, but a return date was not given.

“We have a slight hangover from last season – Stanislas, Cook and Francis – and during pre-season we picked up a few more (Gosling, Brooks and Kelly). We’ve got versatile players in the squad which helps but we can’t take any more injuries.”

Eddie Howe on the Cherries injuries

Lewis Cook is back after travelling to America:

“He won’t be ready for this game but he’s getting closer all the time. He trained with us for the first time fully a couple of days ago. It will be a big boost for us when he comes back”

Ole has confirmed that Diogo Dalot is unavailable:

“He’ll be out for a little while, hopefully he’ll be back for the games after the international break. He’s had the problem for a couple of weeks.”

Everyone else on United is ready to go apart from long term absentees. Eric Bailly and Timothy Fosu-Mensah

Meanwhile, Alexis Sanchez talks are still ongoing with Inter Milan about a potential loan deal with option to buy. The recurring problem are his high wages.

Ole has also confirmed that Pogba and Rashford are the two penalty takers for United for the season.

Wolves played a Europa League match last night in Turin and came out with a 3-2 win. No injuries to report as Nuno Santo played a strong side for the first of two fixtures against Torino.

Sam Dyche confirmed that Robbie Brady is out for this weekends match against Wolves, but has returned to full training.

Danny Drinkwater is also out, but will feature in the Carabao Cup as he continues to get back to full fitness. Steven Defour is back in light training.

Frank Lampard said that N’Golo Kante picked up an injury and will be assessed before the Norwich game on Saturday.

Rudiger played 90 minutes with the developmental side on Monday and will, hopefully, be ready next week.

“He is training, looking bright and sharp,” Lampard said. “But we want to protect him as he has had a long time out.”

No major changes for Klopp and Liverpool as Alisson is still recuperating from the calf injury he sustained in GW1.

Naby Keita (groin) and Nathaniel Clyne (ACL) are still out. Adrian is fully fit and ready for Saturday.

Pep Guardiola mentioned that Zinchenko had a cramp after the match against Tottenham last weekend, but is ready to go.

John Stones (thigh) will not feature this weekend as he is dealing with a muscular problem and will be assessed between 7-10 days.

Joao Cancelo is fit and ready to play for City.